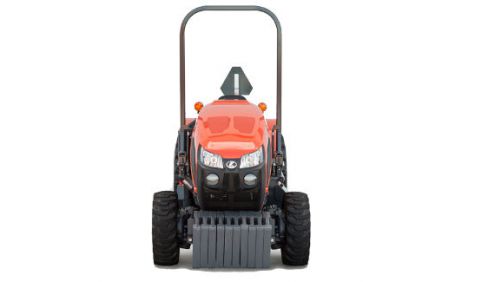 Kubota engineered the M5 Power Krawler specifically for work in vineyards, orchards or anywhere else that might require a narrow tractor that features M-Series power. With an intelligently revamped operator station, improved hydraulic capacity a... + Read More

Fields with asterisks* are required. Please email our helpful staff with any questions or comments using the contact form.

Send to a friend »

Send To A Friend

Fields with asterisks* are required. Your friend will receive an email that contains a reference to this page. Please send this email only to people you know who would be interested in this information.

Updated Engine Features
The M5 Power Krawler has an updated V3800 Tier IV engine which has a common rail fuel system, inter-cooler, exhaust
gas re-circulation and employs a diesel particulate filter and a selective catalytic reduction for minimized emissions.
Additionally, it has an increased alternator capacity (60A to 80A), larger radiator, larger diameter cooling fan and RPM
memory for repetitious actions.

Transmission
High productivity requires versatility, such as traveling at low or sustained speeds. This tractor's transmission has F12/R12
speed, with six speeds in two ranges. The shuttle shift is electric over hydraulic making direction changes a breeze. Bi-speed
turning and 540/540E PTO is standard as is the Overdrive feature for improved travel speed. It has a wet disc hydraulic brakes
and gear lock parking.

Redesigned Cab
To promote operator efficiency all main controls are on the right hand side of the operator while the steering wheel has 40
degrees more tilt. Dual side mirrors and an easy access fuse box are standard.

Low Ground Compaction, Superior Traction and Climbing Force
Due to the Power Krawler's larger rear footprint, the weight of the tractor is dispersed more evenly, offering better flotation, less compaction and less damage to soil. It’s distinctive crawler design places the oscillation point below the drive sprocket and directly in the path of the driving force, thus ensuring greater traction, better stability and more sure-footed climbing. Additionally, the Power Krawler’s left and right crawlers oscillate independently. This means that both tracks can flexibly traverse bumpy surfaces, keeping both sides of the tractor in contact with the ground at all times.

Let us help you get moving.